EBT is effective because the skills directly address the brain-based root cause of most problems: brain circuits.

All of us have a few faulty wires, reactive circuits that are stored in the emotional brain without our permission early in life or later, in moments of overload when the protection of conscious thought was not available.

These wires are not only highly plastic - we can change them - but by using simple emotional techniques, we can switch them off. Think of the reactive wires as fire hoses, spewing chemical and electrical dysregulation, including public health enemy #1: the stress hormone cortisol. Imagine being able to switch them off and activating circuits that spew healing chemicals instead.

As stress causes up to 90 percent of health problems, resetting our approach to stress in a way that improves physiology, and promotes biological and psychological resilience is a national priority. It is not just about our epidemics of mental health problems and chronic disease but our need to clear cortisol quickly as the foundation for daily self-care so that the extremes brought on by cortisol can stop ripping our society apart. Creating a kinder, gentler world takes a population-wide movement to decrease our exposure to chronic stress overload.

The root cause is the circuitEBT focuses on switching circuits as an update in our approach to health because neuroscience research has shown that the brain operates based on wires. Whichever circuit is activated in the moment controls our biochemistry and electricity and our emotions, thoughts, and behaviors. This new approach of moving past excessive dependence upon pharmaceuticals and procedures is natural and drug-free: controlling our brain's circuits.

Tom Insel, MD, director of the National Institutes for Mental Health from 2003 to 2015 said, "Mental health problems are biological problems involving brain circuits. It's the faulty circuit that is the problem."

Michael Merzenich, PhD, professor emeritus at UCSF and father of neuroplasticity said, "The brain has to train itself out of its problems.Rather than relying excessively on chemicals, train the brain for resilience to promote lasting results and prevent recidivism."

According to Igor Mitrovic, MD, professor of physiology at UCSF and scientific director of EBT, "The circuits are what produces emotions, behavior, and thoughts. They are at the core of who we are as individuals." 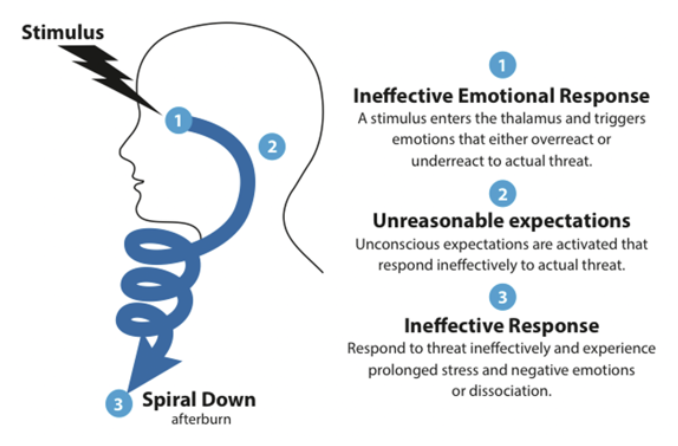 What are circuits?The survival of the species is dependent upon bringing forward our experiences in time, so more of what we do is automatic. The brain stores memories of our experiences as neural circuits, coactivations of neurons in various strengths, sizes, and levels of dominance. All this is accomplished to fulfill the brain's #1 priority (other than procreation), which is survival.

These wires contain instructions that are quite convincing. When the circuit is activated, it takes the thinking brain offline, and then unleashes a torrent of biochemicals that make us do whatever the circuit tells us to do. This is not a problem if the circuit is an effective circuit, if instead it is a resilient wire that activates healing chemicals and sensible responses. However, when it activates the other type of wire, a reactive circuit, harmful chemicals, ineffective responses, and physiological dysregulation follow.

The wire tells us to overeat, drink too much, overspend, procrastinate, judge, overanalyze, or obsess, and to always comply reflexively. Only later, after the circuit is no longer active, do we wonder “why did I do that?” We did it because a wire triggered us to do it and we had no idea that the problem was not us, but a wire, nor how to summarily switch if off. 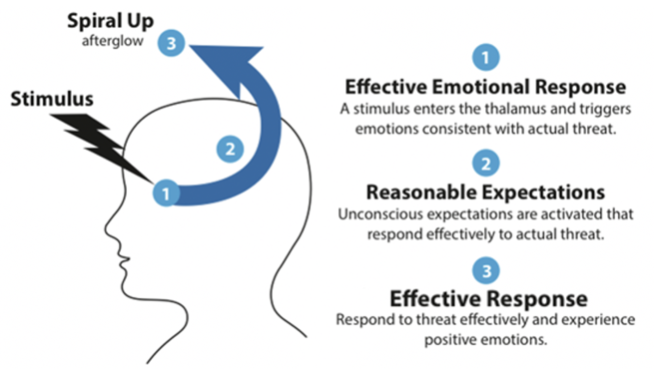 The thinking brain goes offline - Conscious control requires focused, flexible attention and the processing of emotions and thoughts. The stress response, first adrenalin and then cortisol, impair the functioning of the prefrontal cortex right when we most need it to be effective.

The EBT skills were designed to put the thinking brain back online quickly and to clear the emotional blockade consistently and rapidly, typically in one to three minutes. They play by the rules of the emotional brain.

Not at One? Reach for your app and get to One.
Instantly, change your reality.

The Rules of the Emotional Brain

Rule 1. You do not have problems or issues, only circuits.When you feel stressed, appreciate that any problems or issues are circuits. Once you can switch off a reactive circuit that blocks your resilience, problems become challenges and issues fade away. Cognitive, emotional, and behavioral functioning and physiology are at their best and you can solve any problems that remain with more grace, ease, and effectiveness.

Rule 3. State the facts (briefly) about what is bothering you.To be most effective in switching off a faulty circuit, we must activate it. Suppressing emotions and ruminating don't accomplish that but clarifying with a few sentences what ails us does. Saying what bothers us targets a specific circuit that is creating our stress.

Rule 4. Allow yourself to protest feeling bad. Enjoy a brief, healthy burst of anger.Most of us learned that anger is bad, however that proves to be false. Indeed, without a healthy "I feel angry . . ." skill, sadness turns into depression, fear into anxiety or panic, and guilt into shame. We need to honor our anger and use it to switch off stress. A quick burst (aloud or quiet) clears stress rapidly. The prefrontal cortex comes back online, and the stress response is on its way to being shut off. . .

Rule 5. Flow through your feelings in a brain savvy order.After expressing anger, your brain can quickly dismantle the emotional blockade that blocks resilience, and your feelings will be quite fluid, flowing from sadness to fear to guilt, then onward to highly nurturing and empowering positive emotions. There is no need to labor over your feelings or analyze them. They simply flow, clearing negative emotions and amplifying positive ones, both of which are required to switch off the sympathetic nervous system and activate the parasympathetic nervous system ("switch off the HPA axis or stress response"). The process is easy as the EBT app guides your way.

Rule 6. Listen to your body and do what feels good.The EBT app keeps all five of the tools that correspond to the five levels of stress (“physiological brain states”) at your fingertips. Which tool do you use? The one that feels best! Getting to Brain State 1 is associated with survival, so using the most effective tool brings an immediate surge of neurotransmitters.

This reward response even applies to the most powerful rewiring stress level, Brain State 4. In that state, reactive circuits are firing, and by switching them off, you not only feel better immediately, but as the circuit only updates itself when activated, using the right tool also promotes raising the set point and promoting lasting improvements in health. This makes the tool for Brain State 4 (“the Cycle Tool”) the powerhouse of the method.

The challenge is that there are three neural causes of that stress overload, hence three variations of the Cycle Tool. They are 1) The Be Positive Tool for situational stress, 2) The Feel Better Tools for stress caused by false generalizations (“Core Circuits”), and 3) The Stop A Trigger Tool for stress caused by false associations (“Survival Circuits”). Once you master the method, it's easy. Even the thought of using each of the tools will be enough to steer you to using the most advantageous tool. It will bring the strongest positive emotion, which you will experience in your body. It is the body that tells us which tool to use: the one that feels the best.

Rule 7. Don't stop until you pop. Get to Brain State 1.The last rule is to insist on feeling great. Stress is addictive and most of us have a set point in stress and are comfortable feeling uncomfortable. To achieve the best results as rapidly as possible with EBT, do not settle for a mediocre mood. It's normal to be in all the stress levels in any given day but breaking free of stress often throughout the day and, even more, getting to that optimal state, is best for raising your set point as well as being at your best. Whenever you notice that you are stressed, reach for the app and pass through it once or as many times as needed until you feel the lightness, glow, and peace of Brain State 1. Be adventurous and try several of the EBT 5-Point System tools, and do not stop until you are at Brain State 1, so your resilience pathways will become dominant sooner, and you'll get to Brain State 1 spontaneously more of the time.

The challenge is that there are three neural causes of that stress overload, hence three variations of the Cycle Tool. They are 1) The Be Positive Tool for situational stress, 2) The Feel Better Tools for stress caused by false generalizations (“Core Circuits”), and 3) The Stop A Trigger Tool for stress caused by false associations (“Survival Circuits”). Once you master the method, it's easy. Even the thought of using each of the tools will be enough to steer you to using the most advantageous tool. It will bring the strongest positive emotion, which you will experience in your body. It is the body that tells us which tool to use: the one that feels the best.

In summary, EBT works because our evolutionary forces favor the survival of the species, and chances of survival are increased if we switch off the stress response, which takes transforming negative, stuck emotions into positive feelings that flow. The capacity for positive emotional plasticity is fundamental to the genome. All EBT does is give you a way to discover, activate, and strengthen those pathways.

In a time of immense challenge in our world, there is no more powerful force for the good than the human brain at One. EBT works, but it takes bravery to step away from the pre-neuroscience paradigm and choose to repeatedly raise your state and, over time, raise your set point. It's a change, but a change for the good, and our best hope of creating a new and better world, a World at One. 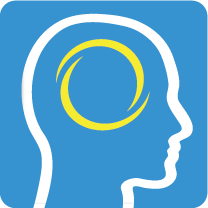